In Cherub's books, you affirm that the above mentioned organization is real (or a very similar one), but that its existence is secret. Is it true? In that case, what can you tell us about the Cherub organization?

CHERUB isn't real. If it was I would have been locked up for writing about a top secret organisation!

In Henderson's Boys you relate the birth of Cherub. It's that a story you had to write (or want to) or something the fans demand you?

I wrote a breif piece about the beginning of CHERUB at the start of my first book The Recruit, and didn't think about it for several years.Then I reread it and thought it would make an interesting spin off.

It might be fun, but I would have been useless. I was always the kid who got picked last for sports teams, so I wouldn't have made a very good cherub.

Why not adults but kids? Is it easier to write about and for young readers? Do you read teen books?

I think young readers like to read about characters who are their own age. I read quite a few teen books, just to keep up with what my rivals are doing (and to steal the good bits!).

The teenager spies from Cherub are so realists, just not like other young spy from nowadays. We are talking about Alex Ryder saga, character who is very similar to a classical icon from the genere, James Bond. What do you think about this kind of novels - for adult and young readers - with glamourous cars, old fashioned gentlemen and unbelievable gadgets?

There's nothing wrong with them, but they have become a bit of a cliche. That's why I wanted to make CHERUB gritty and realistic. The world didn't need another spy in a bow-tie driving around in a Ferrari!

Your characters are teenagers who do inapropiate things for their ages. Sometimes they seem to be older than they are. Did you take the base from real people? Do you think that nowadays literature is showing teens who look like kids, teens that don't seem at all like the young boys and girls?

I think kids vary widely. For example, James is interested in girls in the early books when he is only 12. I've heard some people who say that is too young, but I had a cousin who spent all his spare time with a girlfriend when he was only 11, while I never got my first girlfriend until I was almost 16.

In your books you wrote about violence, drugs, homosexuality. . . topics that have often been avoided, specially for young people. Do you feel comfortable writing about this? Is it a mistake to obviate this topics in youg literature?

I think you have to have this stuff in the books if it is to be realsitic. It is also important because kids see these things in the real world and many of them can relate to it. For example, in Britain they have had success teaching children in youth prisons to read by giving them my books.

Do you have preference for any character from Cherub? Was it difficult to write about any of them?

I think James' sister, Lauren, is my favorite. Her sibling rivalry with James makes her an interesting character and it's good fun to write scenes where James and Lauren tease one another, just like me and my sisters used to do.

James has a so complicated love life. He had a new girl in each mission! Is he going to be like that always, from girl to girl, or is going to take care about Kerry finally?

Ahh that's a big question for every CHERUB fan! You'll have to wait and see when you read the 12th and final book. It comes out in Britain next year, but I think Spanish fans will have to wait a few years longer.

It's common to believe that the golden age of spies novels finished with the fall of the URSS. The "enemy" now is the arabic world. Nevertheless, the missions of the spies of Cherub are focused on criminals, on people who break the law beyond ideological conventions. Is that more realistic than a world divided in two?

I'm quite restricted in what I can do because my two main characters are caucasian with blonde hair. It wouldn't be relaistic to send them undercover in Arabia or China because of the way they look and the languages they speak. Also, I think kids can relate to stories better if they are set in the kind of enviroments in which most of them live.

Cherub saga has 12 books. Which one is your favourite and why? Which one was harder to write?

My favourite is The Recruit, just because it's so exciting when your first ever book comes out. The hardest to write was probably The Killing. I wasn't happy with the early drafts and had to do loads of rewriting.

How do you compile information for the saga? Did you plan all the 12 books before you began to write?

No. Sometimes I wish I had because a few tiny errors have crept in. However, I was an unpublished author when I started writing the series so I had no idea that they would go on to sell millions of copies and be published in more than 20 languages.

Cherub was a clamorous succes in bookstores. How is the behaviour of the Cherub fans? Have you ever had a bizarre petition?

I have some great fans who e-mail me. I also get some wierd letters. Just yesterday I got a kid asking me if I could sign a neck tie and send it to him for a charity auction!

You are a very active user of the Cherub's official forums. What means to you this close contact with your readers? What experiences, positive or negative, would you stand out from your activity in the forums?

The forums are a great way to interact with fans and get feedback on which books and characters they like. The only downside is every so often you'll get someone posting rude pictures or something like that and you have to spend time cleaning it all up.

We know that you have worked as investigator before devoting yourself completely to the literature. Has it helped you to write some scenes?

Yes. In particular I used to work with lots of retired police officers. They used to have lots of great stories about things that happened when they worked as cops and a few of them have ended up in my books. 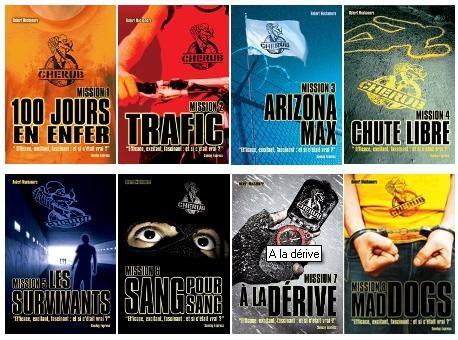 Before become into boss of the mafia and walking arround Muchamoria's streets with a bloody knife in your hands, would you like to visit Spain? I have only ever visited Spain once.

I spent a weekend in Barcelona. The funniest part was opening the curtains in my hotel room with no clothes on, only to discover that the room was on the ground floor overlooking Las Ramblas. There were about 20 people walking past and they all looked very shocked!!!